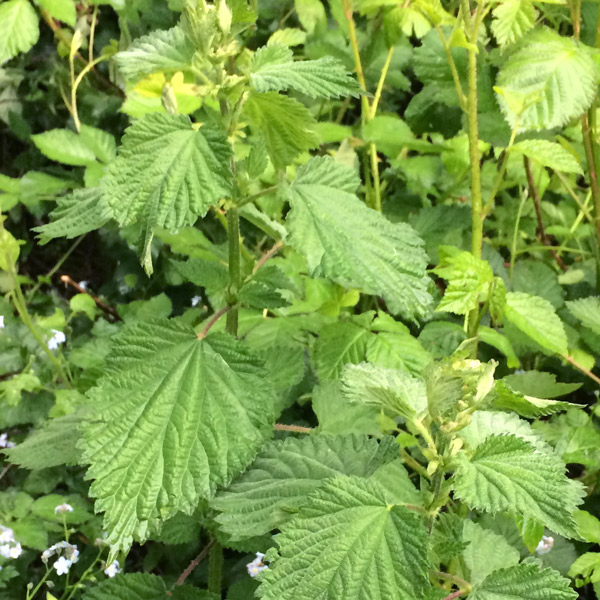 One of the loveliest herbal treats of the spring and early summer is fresh nettle leaf (Urtica dioica or U.urens), found in abundant quantities in cool, moist places along rivers and streams. Nettle is such a rich food source that if it didn’t have a strong protection it would be completely eaten before it had a chance to seed.

When you touch its mint-like, deep-green leaves, stinging hairs break open to exude formic acid, producing temporary burning and itching (sometimes leaving bumps or welts on the skin that last a day). Cooked or dried nettle doesn’t sting. Interestingly, the sting is part of their medicine. Formerly, thrashing the joints with fresh nettle was done to the legs of horses, and yes, the limbs of consenting adults, to relive arthritis – I have met several people who had complete cure from such external stinging.

Stinging aside, nettle leaves contain more protein than any other native plant, plus large amounts of iron and trace minerals, fat and chlorophyll. It is a tonic herb that, when eaten or drunk daily, will keep nails and hair strong. It replenishes the thyroid and adrenal glands and nourishes the liver – it has been used for hundreds of years as a remedy for hangovers. It is excellent medicine for those recovering from illness, or pale, anemic types with low blood pressure. A cup of nettle tea or dose of this lively plant as tincture, will boost arterial pressure, distributing oxygen, especially to the brain, so it has an awakening, enlivening quality, which makes it a good herb for counter-acting fatigue.

Nettle leaf infusion or freeze-dried nettle caps also has anti-asthmatic properties, so open up the lungs and help the body deal with seasonal allergies (the seeds have this action too). Nettle extract, the fresh juice or tea is used to move uric acid crystals from the tissues and bring them into the bloodstream to be excreted by the kidneys. This is especially important for those suffering from gout, swollen joints, arthritis and eczema. That nettle is found in cool, damp shady habitat, indicates that it is helpful for removing the cool and damp of these ailments. Compresses of nettle leaf are excellent for healing burns. The root of nettle is used for nourishing the prostate gland and strengthening the bladder, making it useful for incontinence. Nettle has been is also a great addition to animal feed and will increase egg production in chickens and enrich the milk of cows.

Nettle leaves should be picked in spring and early summer before they become tough and before the plant seeds. Picking any wild herb requires respect for its habitat and only picking what one will truly use. Cutting the tops of the plant while young will allow them to continue to grow and seed for the following year. Wash the freshly picked nettle tops and hang them upside-down to dry or set to dry in open baskets. The root of the herb is only pulled up in late summer or fall, after the plant has gone to seed.

You may also be interested in this recipe for Spring Pasta Salad with Nettles.