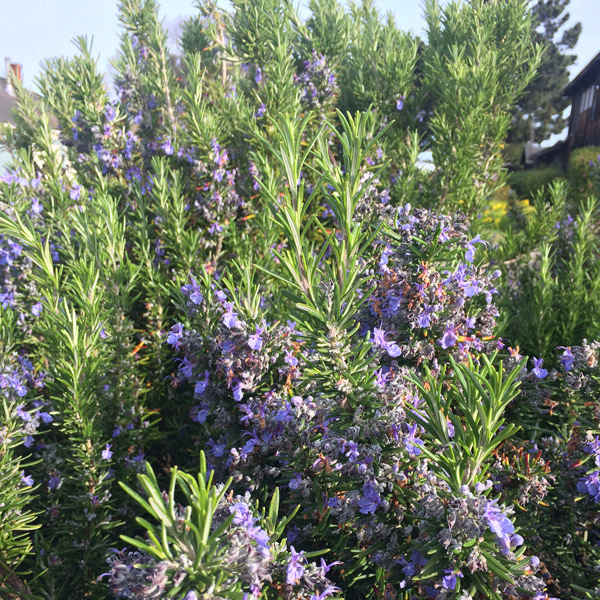 In winter, when many trees stand bare against a grey sky and most herbs in the garden have gone back into the ground – we turn to the evergreens for both spiritual and nutritional sustenance. Herb rosemary, Rosmarianus officinalis, is one of my favorites in any season, but its qualities are most appreciated this time of year. Not only is this evergreen perennial beautiful to behold (it may even be sporting it’s soft-blue flowers in early winter), but it’s warming and stimulating effects are much needed! The leaves look like one inch long pine needles that are dark green above and paler green to white underneath and when you rub them, the have a strong aromatic odor, that’s almost camphorous – indicating its most medicinal aspect, its volatile oils.

Since ancient times this shrub has had a reputation for strengthening the memory, and thus became an emblem of fidelity for lovers. It has been long used at weddings (worn by the bride as a wreath), funerals, for decking churches and banquet halls, as an incense in religious ceremonies and magical spells, and used as smudge for general protection from unwanted influences. It was one of the cordial herbs used to flavor beer and wine and is still a major ingredient in many recipes (see Favorite Recipes). In the winter, dried rosemary can be thrown on the wood fire as a potpurri. If you have a wood-burning stove, you can put sprigs of rosemary in a pot of water and set it on top to provide a lovely aroma. It doesn’t just smell good – it’s aromatherapy is uplifting, anti-microbial, clearing to the mind and opening of the heart and lungs.

There are varieties of rosemary with variegated leaves, but it is those leaves of pure green that are used medicinally. The strongest oil content is found in the flowering tops of the bush, but the leaves can be picked anytime for its medicine, which makes it a year round, always available fresh herb. It is highly antioxidant, and therefore a prime free-radical scavenger – probably one of its main qualities for the heart and brain. It is a mild stimulant, providing increased circulation to all areas of the body, in particular the heart and brain. Therefore it is useful for dementia, Alzheimer’s, poor circulation, and weakness of the heart and chest. As a stimulant, it is warming and heat-producing yet at the same time anti-inflammatory, so can treat headaches, joint aches and swellings.

The essential oil of rosemary has carminative (helps expel gas from the intestines) properties and so the herb is helpful where there is stomachache, indigestion or poor digestion. Its high calcium content makes it a nervine (effects the nervous system) that strengthens and restores energy and endurance, especially when there is a lot of mental work – an excellent herb for taking tests! The oil or tea can also be rubbed into the scalp to stimulate hair growth and help stave off premature baldness. Oil or tincture of rosemary can be rubbed into limbs where there has been a loss of mobility or nerve damage, or for gout found in the hands or feet.

It is easy to make a cup of tea by just picking a fresh sprig of rosemary, placing it in your teacup and pouring boiling water into it. Cover the top so as to trap the essential oils and let it sit for 15-30 minutes. You can drink this infusion for colds and flu, depressive mind-states, to help clear lungs and strengthen the heart. You can also make tea from the dried leaves, using 1 teaspoon for every 8-10 ounces (a large cup) of boiled water.

Though native to the Mediterranean it grows practically worldwide. Rosemary bush and creeping rosemary are popular landscape plants because they are drought tolerant, yet also thrive in constant rain. You can start your own bush just by snapping off a woody twig from a healthy plant and sticking it in rich soil. Keep it watered well for the first year while it takes root and before you know it, your rosemary will be growing vigorously.